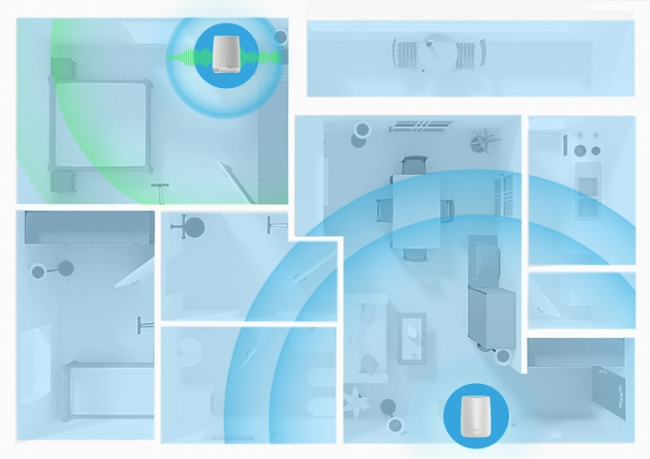 I was reading about the Netgear Orbi Voice, a router and smart speaker combo, and found myself thinking more about what the future will hold when it comes to surveillance using APIs. I predict we will see voice enablement, and smart speaker “listening” creep further into the router layer of our lives. This isn’t just a smart home hub play for Netgear, this will become a play for dominance at the network level, and who has access to our bits and bytes in a post net neutrality world, and who ultimately becomes the gatekeeper for the value that exists at this layer.

We are going to see more voice enablement, and ultimately surveillance pushed to this level of our life in coming years. I predict we’ll see major cable Internet providers move towards offering a version of this router by default. The revenue opportunity of having access to the data generated by an always on, default installation, surveillance device at the network level for every home will be too great to ignore. Not only will you have access to all web traffic for a household, you will have access to any other device connected to that network, and conversational access to everyone who lives or enters a house. When devices can be security cameras, televisions, sensors, other connected objects, as well as smart speaker listening devices, you have access to a 360 view of a household.

After watching the world of Internet of Things roll out over the last five years, it is pretty clear that device and application companies will do anything to get at the data generated at this layer, and consumers have demonstrated they are pretty happily ignorant of the surveillance that is happening as long as they are given some minimal amount of convenience, or at least entertainment. Something that will infect the network layer of our homes and businesses, making voice something that is baked in just like wifi did over several years. Then pushing it to consumers, whether they want it or not. Similar to what we are starting to see in some hotels, where Google or Amazon devices are slowly becoming a fixture on the hospitality landscape. Further exposing us to surveillance technology, and working to normalize it in our world.

Just like with any other Internet connected device in our life, we are going to have to learn to accept, or resist the infection of our physical world with these digitally enable objects. Realizing that 98% of these objects aren’t about convenience, security, or any of the other pretenses in which they are marketed and sold to us, and that they are purely to surveil us and generate data that can be sold to the highest bidder. Something that will will always be abused along the way, taking advantage of the surveillance that is baked into this new dimension of capitalism, and the willingness to look the other way by the device manufacturers and the application developers. We just have to continue to ask ourselves when enough is enough, and when is their too much technology within our very human lives.