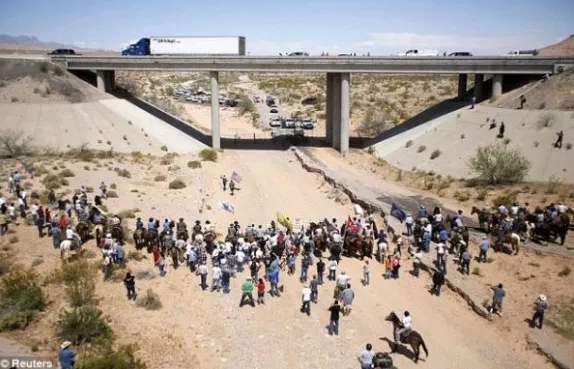 I’m seeing a regular meme on my Facebook from my rural friends the last couple of weeks. The meme is all about defending their second amendment beliefs, and showcasing that their right to freely assemble militias and staying armed is what keeps the government at a distance, and from intruding on their rights. The meme includes the drone shot of the Bundy stand-off in Nevada being used as the image, showcasing the usual lack of ability by these folks to look at the bigger picture–firmly believing that having guns is the only thing that is keeping the government back, and protecting their rights.

If that was all black, Mexican, or muslim group, would those guns would have kept the U.S. government from responding with force? You don’t think there might actually be other things going on here that are keeping the feds from bombing the hell out of this group? Maybe race? Maybe shared ideology? IDK, several other things beyond just those guns. I’m pretty sure if it was a bunch of armed muslims, the guns wouldn’t be doing very much. Demonstrating once again, how guns are used to isolated, divide, and restrict freedoms, more than they are actually about protecting our freedoms. The only reason y’all haven’t thought about why this a white thing, it is because you don’t have any friends of color to tell you your way of life doesn’t make a whole lot of sense. I don’t have ANY friends of color on Facebook saying that militias are a good idea–not one. Only my poor white friends, in rural areas are posting these memes.

In that picture, those guns are keeping these people isolated, divided from how policy gets made. Did guns stop them from shutting down the Bundy situation in Oregon? No. It all comes down to calculating the aftermath of these situations and after Waco, and Ruby Ridge, which has left the FBI is a little more calculating about use of force. The primary reason the federal government didn’t squash the uprising in Nevada was that the backlash of bombing the shit out of a bunch of white conservatives would have been too great. Period. The overfunded military that these conservatives blindly continue to pay taxes to support, while simultaneously taking up arms against, won’t hesitate for one moment sending in a drone, bomb, or other measure to get the job done.

You go ahead and keep waving your guns. Remaining in isolation and thinking you are free. Your guns and militias are more about keeping you isolated and able to get riled up regarding a handful of hot button issues, than they will ever be about defending your rights against the government. Meanwhile, the rest of us will actually be working to change policy, influencing popular opinion, and investing in programs that help feed people, protect workers rights that keep us employed with a living wage, and trying to give health care to people. But yes, yes, you are free, your guns are what is making your life better, and without it you’d be killed instantly by the brown people over that want your stuff, or the government who is just looking to take everything you have around each corner.

The only thing protecting you at this point is your race, and shared ideology. Once you lose this, your guns aren’t going to do much for you. You flashing a photo of the Bundy situation isn’t meant to scare away the federal government–I guarantee they aren’t scared of you. It is meant to send a signal to all the brown people, helping reenforce your position within the system, and defend the racial lines that keep you safe from prosecution, and the government just using a drone to lob a bomb into your militia. Guns don’t stop the U.S. government from invading other countries, or putting down uprising in this country, when it thinks it can get away with it publicly afterwards. Consider the MOVE bombing in 1985 in Philadelphia: 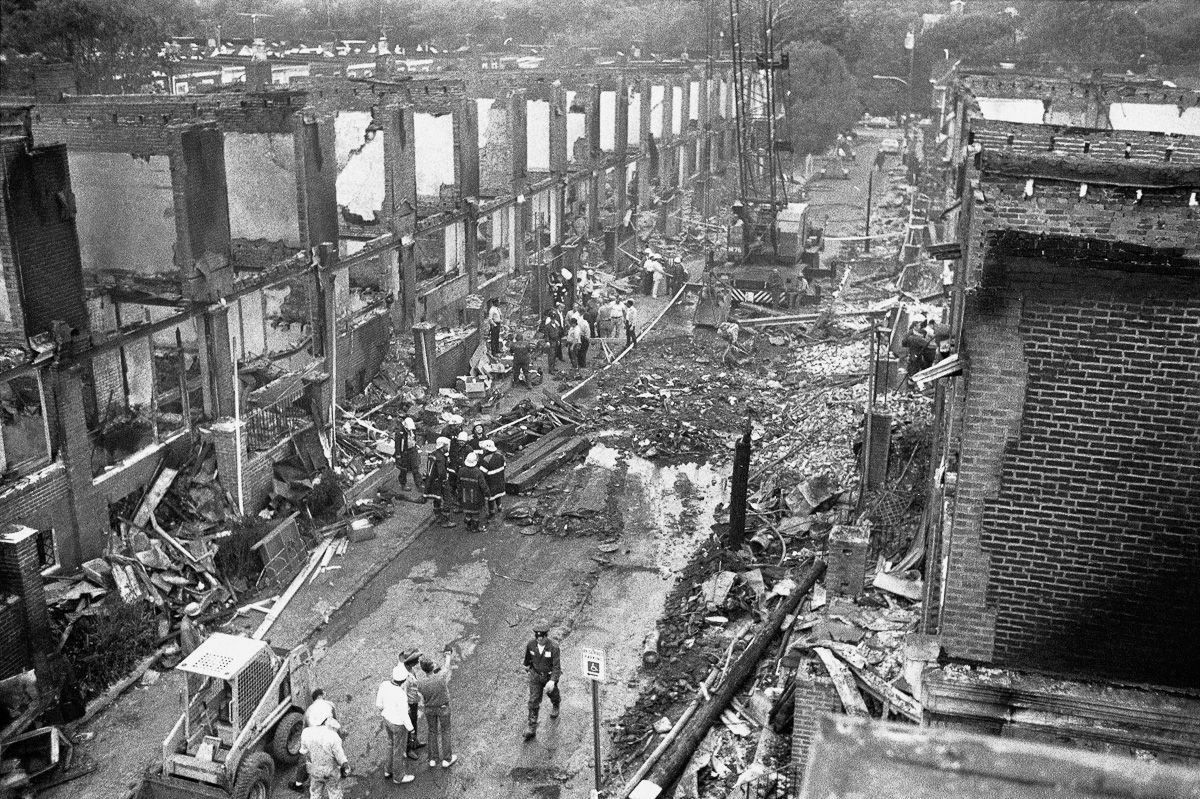 Impressive standoff photo eh? Oh, and why is it that we have gun laws in California? Because a bunch of liberals live there? No it is because a bunch of black folk decide it would be good to have a militia, when there was a republican governor. 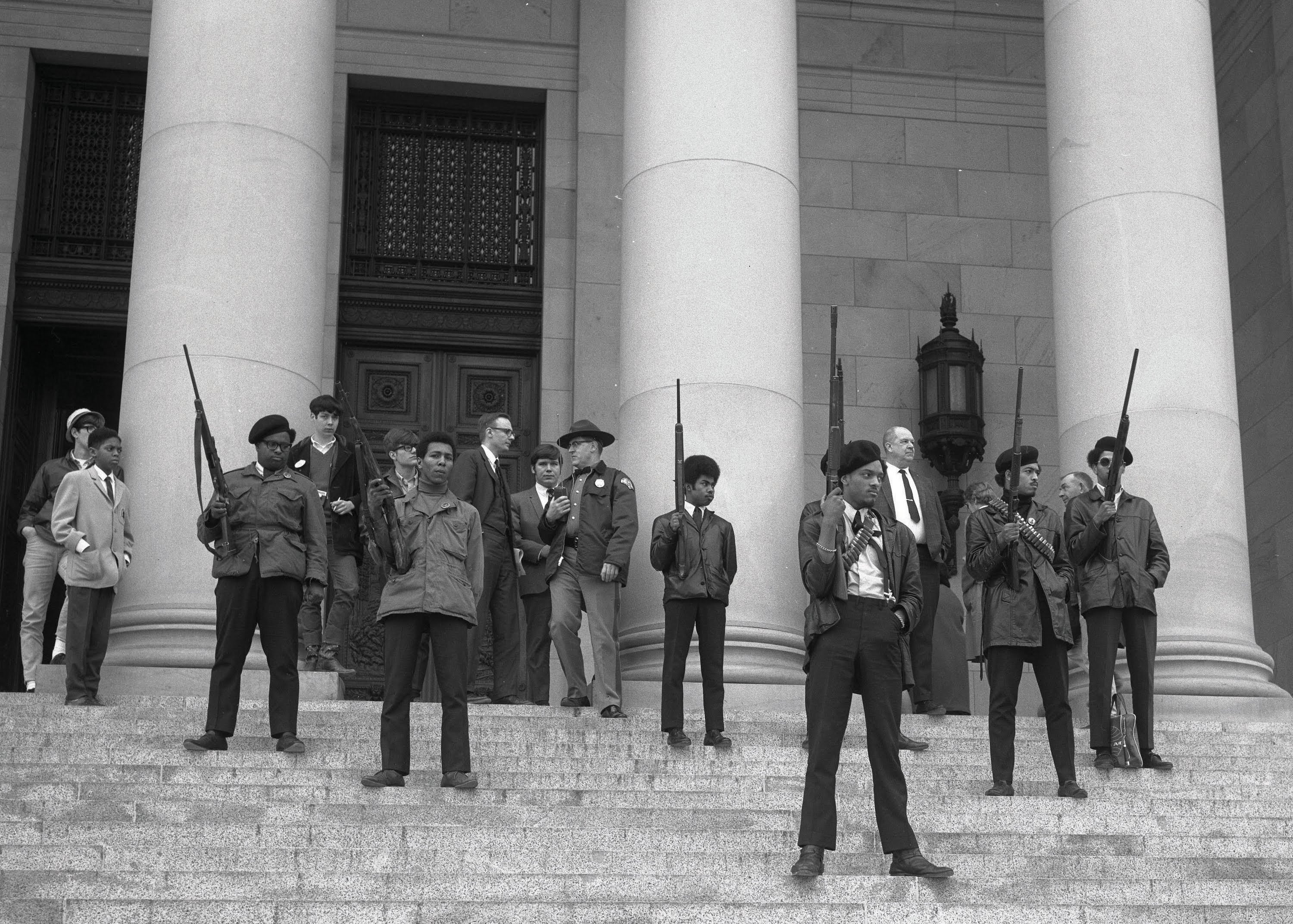 You just keep showcasing your ability to miss the big picture, and convince yourself that your guns are what is keeping you safe. It truly is all you got. You’ve allowed yourself to become so isolated, so information starved and ineffective in how policy and laws get made in this country, you’ve given the green light for all your freedoms being taken away. You’ve traded freedom for your 2nd amendment, and have made yourself a data point to rile up every two and four years when you are conveniently needed to shift votes. Nice work! #Murica