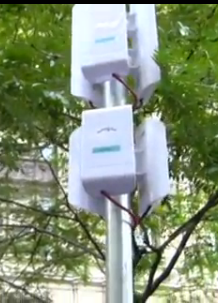 As reported by Adrianne Jeffries of BetaBeat, the Free Network Foundation is building a private network for Occupy Wall Streetand its affiliated movements in other cities. So far the organization has deployed two prototype FreedomTowers providing Internet access at Occupy Wall Street and Occupy Austin. We are the Free Network Foundation, builders and advocates of distributed and decentralized communication systems. We believe that the Internet should be used to connect people, not to spy on them, oppress them, or turn a profit," says co-founder and executive director Isaac Wilder. In addition to providing Internet for the occupiers, the network provides local services as well has secure communications between occupy locations, preventing them from getting intercepted on the open Internet. This is something I've said we need for some time now. We need a blueprint for how its done, have equipment on hand across the country and have people trained up on how to deploy, manage and use at a moments notice. Free the Network is running a campaign for $75,000 on IndieGoGo, trying to raise money to complete the network, and keep operating. This type of network is critical to the future of democracy and ensuring that any social and political movement can organize, communicate and make their voice heard.
← Previous
Next →