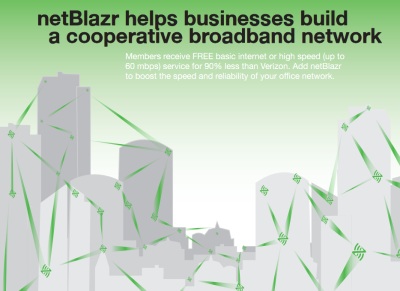 I was reading a great post in Gigaom about community broadband. In short, this company called netBlazr wants to create a community supported broadband network using a commercially available and industry-tested radio access and networking equipment. They are doing this in Boston, but could be implemented anywhere. This got me thinking thinking about the state of our worlds Internet access, and how many people want to be able to control and shut off the Internet when it suits them, such as in times of riots like in London, or even San Francisco BART, and in extreme cases like Syria and Egypt. As a society, we are becoming very depenkinlane-productions2t, and when disrupted we don't have access to basic services and information. Even though the Internet is distributed, it still flows through a central network, with governments and corporations working to control this network and its entry points. I think what netBlazr wants to do is great. I would like to see it go further though. I would like to educate and enlist individuals in various communities to become nodes on a community network. The goal of this network would not just be for everyday Internet access (though it could be I guess). It would be for times when Internet access is disrupted, either intentionally by government and corporations, or unintentionally like natural disasters. We would need individuals in every community to invest in the equipment, learn how to setup and operate, and then create some sort of registry system that would identify which nodes are available, and build some sort of map to show coverage. 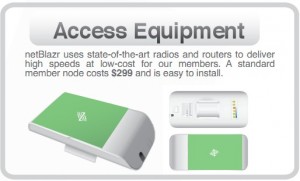 These networks could be deployed and managed on a local, community level...but could be part of a larger coalition that discusses best practices, strategies, etc. This is just an idea I had as I read the Gigaom post, and other material from netBlazr and Stop the Cap. As I did with my story, Telehash Node Runners in Egypt. I will write some stories to help me understand how a community broadband network can be deployed to provide emergency and wider community based Internet to EVERYONE, and ensure every person on the planet has access to information, and are able to communicate with whoever they choose.
← Previous
Next →