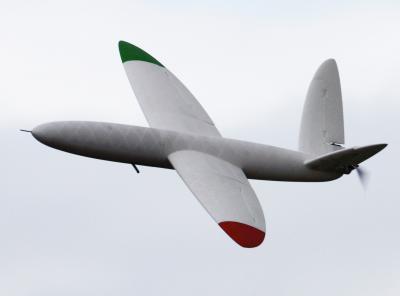 Engineers from the University of Southampton, in the UK, have designed and flown the world's first 3D printed aircraft. The plane is an unmanned air vehicle (UAV) whose entire structure has been printed, including wings, integral control surfaces and access hatches. It was printed on an EOS EOSINT P730 nylon laser sintering machine, which fabricates plastic or metal objects, building up the item layer by layer. The unmanned aircraft was designed with no fasteners, all equipment was attached using 'snap fit' techniques so that the entire aircraft can be put together without tools in minutes. The aircraft is electric power and has a 2-metres wingspan, with a top speed of nearly 100 miles per hour, and is almost silent when in cruise mode. The 3D printing process allows the designer to create shapes that would normally involve costly traditional manufacturing techniques. This technology allows a the custom aircraft to be developed from concept to first flight in days, using conventional materials and manufacturing techniques, such as composites, this would normally take months. This project has been led by Professors Andy Keane and Jim Scanlan from the University's Computational Engineering and Design Research group. The University of Southampton has been an innvoator of UAV development since the early 1990s, when they began work on a Autosub programme at its waterfront campus at the National Oceanography Centre, Southampton. This battery powered submarine can travel under sea ice in more than 300 voyages to map the North Sea, and assess herring stocks. University of Southampton is also launching a groundbreaking course which enables students to take a Master's Degree in unmanned autonomous vehicle (UAV) design.
← Previous
Next →