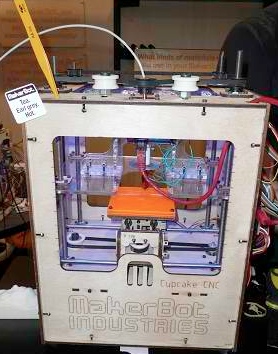 A 3D printer works by taking a 3D model, then by making a series of slices that are printed one on top of the other to create a 3D object of the model. Since 2003 there has been large growth in the sale of 3D printers, due to the decline in their cost. You can find 3D printing used in jewellery, footwear, industrial design, architecture, engineering, construction, automotive, aerospace, dental, medical and a wide variety of other industries. There are different types of 3D printers from low cost Makerbot printers for around $1500 to higher end ZCorp printers running around $60,000. There has even been buzz around 3D printers being able to print most of their own parts, enabling 3D printers to recreate themselves. Companies offering the the services of 3D printers range from hobbyists to publicly traded companies like Stratasys. 3D printers are just the golden piece of technology, making the entire 3D print and manufacturing supply chain possible.
← Previous
Next →