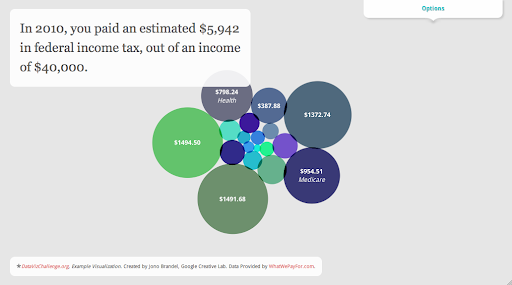 Understanding how the federal government spends our money is on all of our minds, especially this time of year. I recently pulled out an old tool I build last year to visual the State of Oregon spending, and reworked it to help visualize Obamas 2012 Federal Budget. I wanted to set what my priorities were regarding the federal budget. I'm not 100% finished, still have a little work to do on it. Today I came across a very cool data visualization contest called the Data Viz Challenge. The Challenge: Visualize how your individual federal income taxes are spent. Using data provided by WhatWePayFor.com, they are challenge developers to create a data visualization that will make it easier for U.S. citizens to understand how the government spends taxpayers money. There is $10,000 in prize money including $5,000 top prize. Entries must submitted by midnight of March 27, 2011 with finalists being announced the week of April 11, and winners will be publicly announced on Tax Day, April 18, 2011.

This challenge was created by Eyebeam and Google, with data provided by WhatWePayFor.com. What a great way to educate the American taxpayer through the use of open data, APIs and visualization!