Sencha Animator is an Alternative to Flash 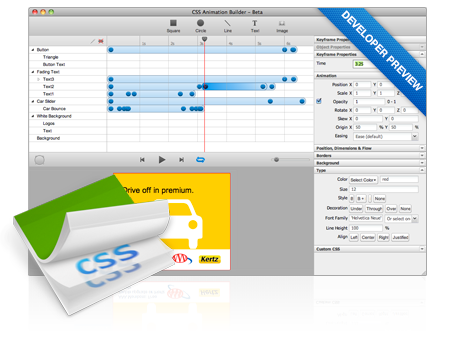 Sencha just released a new GUI desktop application that enables designers to create rich media animations for HTML5 capable browsers. Sencha Animator allows you to put objects such as text, shapes and images on to re-sizable areas and you can move, scale, skew and rotate objects in 2D or 3D and

Since Sencha Animator generates pure CSS3 its output is customizable, allowing you to add and modify the CSS3 code without hand writing thousands of lines of CSS. Though it doesn't replace all uses of Flash, it can replace several key areas including: Since Sencha Animator outputs HTML5 / CSS3, it works on major mobile platforms include IPhone, IPad, Android, and Blackberry OS6. Its just a preview now, and when released they say it will be priced in the "low hundreds of dollars". We'll have to keep an eye on it. Interesting products coming out of Sencha.
← Previous
Next →