What Technology Ends Up Doing In Our Lives

Audrey and I were having a conversation about what technology ends up actually doing in our lives. At work we switched to a new HR solution for tracking time, which upon my first click told me I needed to install Flash. At home our apartment complex got a new system for paying our rent, which was similar to work, a less than ideal technological solution in which we are mandated to use. Can you see it? That beautiful vision of technology coming into our lives, making it better, leaving us with more leisure time, convenience, and automation. No? We can’t either.

Most of the technology in our daily lives is shit. It is poorly designed, un-secure, and doesn’t serve us well—-however, it also pushes us to serve it in return. Yet, us technologists keep doubling down on the fact that technology is the solution. This application sucks, but if we could just develop one that didn’t suck, everything would be OK. Then when it doesn’t, we just repeat. Repeat. Repeat. Without ever being critical of our technological solutionism, happily repeating it like some low budget technological Groundhog Day. While Audrey and I were talking this morning, I drew up this diagram (which I digitized — cause tech makes everything better ya know). 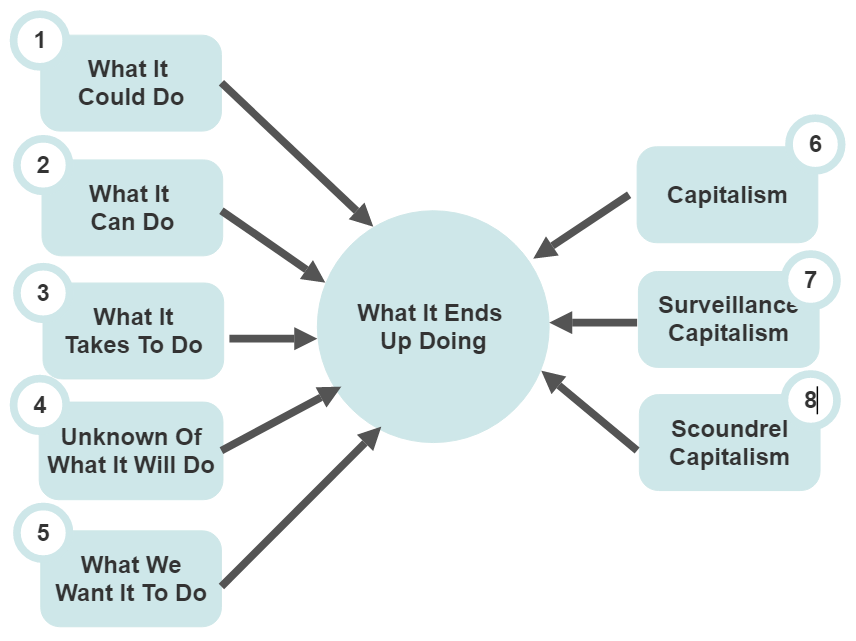 There are many competing forces at play when it comes what technology that actually gets delivered, and it seems like most of us involved in the actual usage and delivery of these applications are in compliant denial regarding the wider forces at play. This was my first attempt at breaking down the reality of what technology ends up doing in our lives.

These areas reflect the forces influencing what technology ends up doing in our lives, leading us to a place where technology doesn’t quite live up to the hype or what we believe in our heads. However, even when you are able to deliver a satisfactory technological solution into the real world, there are actually other forces at play that will drag you down, and ensure that you end up delivering something that is complete shit, or at least becomes weaponized so that it can exploit people.

I am sure there are more influences that I am neglecting, but this reflects much of the shadow forces at play when it comes to influencing the applications on our home laptops, television, and mobile devices—-as well as the matrix terminals we are plugged into each day at work. Ultimately I feel like we are naively focused on technology being good, ignoring our biases and influence listed in 1-5, while also being set up to be willfully ignorant or at least helpless of items 6-8. What is really magically beautiful, is how we seem to be repeating ourselves, and buying into each wave of technology being imposed in our lives, despite all of these realities.

I am concerned with security and privacy, but hell yeah I’ll buy that Alexa for my home! Shit, I’ll buy one for each room. I am concerned with foreign actors influencing our elections, but I’m happy to share that fake news story I did not research on Facebook and Twitter. I hear about applications snooping on people’s mobile address books, but I’ll leave 86 apps which I never use on my Android phone. While it is easy to point the finger at tech companies for the current state of what technology is in our lives, but I’d say we should also be pointing the finger at ourselves, for accepting such a low bar when it comes to what we let into our worlds.